I write under more than one pen name.  It’s true.  I don’t bother to keep my real name or my alter ego a big secret, but I don’t advertise it, either.  In fact, I’m working hard to create an online presence for both pen names.   It’s a lot of work, and not the smartest thing to do if you are trying to build a career as a novelist.

I use pen names because my writing has a split-personality.  Part of me writes with a literary tone and gears toward coming-of-age and redemption stories.   But the other part is darker, gritty, and really likes to get into circumstances that are not suitable for all viewers.   To explain what I mean, I’ll tell you a story.

There once was a twelve-year-old girl who was seriously into her books.  Advanced for her age, she’d already partaken of literary and mainstream fiction, including romance novels that were quite descriptive.  Her parents were unaware. 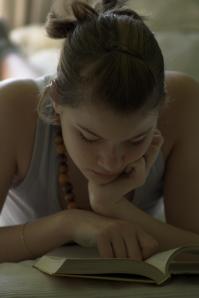 One day, the girl placed a hold on Judy Blume’s novel Wifey.  When the book became available, the library dutifully called to say so.  The girl’s mom thought nothing of it as  Judy Blume was on the “approved” reading list.  She picked up the book and dropped it in the car while she ran errands.

During her outing, the girl’s mother sat in the car waiting at a gas station.  For something to occupy her time, she picked up the book and started leafing through it.

The girl was in big trouble.  Wifey is not a book for children.   This book will be returned to the library immediately.  What were you thinking?  The girl answered that it was a Judy Blume book, so why the fuss?  (Of course she knew, and she contrived to read it anyway.  She would tell you Wifey was extremely tame compared to other books she’d already consumed.)

The girl grew up and had children.  Her daughter was late bloomer and an innocent soul who still puts herself to sleep with audio versions of Brian Jacques books.  This child was mortally embarrassed and humiliated by any conversation involving bodily fluids or nakedness.    It made the grown up girl think long and hard about her own experience and the different stages of adolescence.

So what does this story have to do with my pen names?  I’m not knocking Judy Blume at all as she was an adored part of my childhood and fondly remembered now.  I’m just saying I don’t want other girls to go through what I did with my parents.  Teens aren’t all ready for certain subjects at the same time.   One might love one of my dark, psychological or sexy novels, but another might be seriously uncomfortable.

Better to keep the two types of novels I produce under separate names.  Because it’s not a secret, anyone doing a bit of research would know I write both and might choose to read both.  But for the innocent late bloomers like my daughter, one name is enough.

2 thoughts on “The Problem With Pen Names”