“Ideas are like buses. You sit around for hours in the freezing rain waiting for one and then twenty turned up all at once.”  ~Chris Musgrave

A common fear for new writers is losing The Great Idea, whether it be the tail end of a dream or something that flits through your mind while driving. Experienced writers worry about this on occasion, but I’ll let you in on a little secret.

You’ll have more ideas than you can write in  your lifetime. 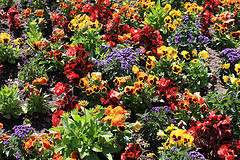 It’s true.  Writing generates ideas (as does conversation) and you’ll never have more ideas than when you’re in the midst of writing something else.

“I get so many ideas from talking with my writers group, regardless of topic.” ~ Kirsten Blacketer

If you are truly worried about losing ideas, there are a few things you can do.

Feel free to record all the ideas you can manage, but don’t panic if one slips away.  Many more will appear.

Trust your writer’s mind. If the idea occurred to you, it’s already been planted in that fertile space. It may surface months or years later and be unrecognizable, but trust that the memory of that idea is still inside the writer’s brain.

I’m a visual person so it annoys me to not be able to write them down and read them, but I’ve learned that mourning a lost idea is a waste of time because there are just too many that come along. Some get developed, some just sit in a notebook, but the more I read, write, and listen, the more ideas I get.

If your problem is a dearth of ideas, which is a whole conversation itself and one I will cover next week, the solution may be simpler than you think.

We’ll talk about generating and developing ideas next week.

Please share your favorite method of capturing ideas or when you seem to get the most ideas.

5 thoughts on “A Multitude of Story Ideas”