“Nature herself demands a death and rebirth.”  -C.G Jung

Death and Rebirth has to be one of my favorite plot and character archetypes.  I know what you are thinking, “Amanda, it is only your favorite because it deals with death.”  You would not be completely incorrect in that assumption, because I love me some dead things!  However, what really draws me to this archetype is the transition that occurs for a character who is placed with a Death / Rebirth situation.

This archetype is a clear cut and dry transition, where a character transform from one type of person into a completely different kind by the end of the story.  There is a hard, black line drawn in that transformation, differentiating the two ends.  That differs from many other archetypal transformation, because with those types, there is usually a gradual change from one end of the spectrum to the other.  Usually this results in a blending of the character from the beginning with the character at the end, where the final character exhibits traits of the old and new character.

When you see “Death and Rebirth” that does not necessarily mean that a character dies and is resurrected (though, that kind of scenario makes for fantastic horror stories).  You can have a character that transforms in a way he or she completely cuts out their old life and takes on a new life.  This can be a physical, mental, or emotional transformation.  The key is to have there be a clear definition of a past life as one character and a new life as another character. 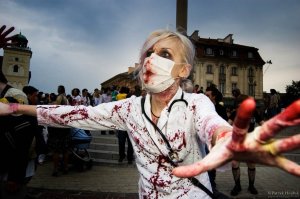 There also has to be an event or some sort of episode that triggers this transformation.  A character cannot just haphazardly begin a transformation without a catalyst.  The forms that a catalyst can take on is innumerable. It can range anywhere from a character’s wife leaving him for another man or a character witnessing something so horrific, that her entire life is changed because of that event.  A perfect literary example that shows a blatant catalyst, which sends a character spinning into the transformation phase, can be found within H.P Lovecraft’s Dagon (If you have not read it, I suggest you do so… right now… or else).  Without giving away the story, because it is deliciously creepy, the narrator happens upon an “island” to where he uncovers cosmic horrors that end up scarring him for the rest of his life, so much so that when he returns to civilization, he is a completely different (and mad) man.  The catalyst of that story is the narrator stepping foot on the island.  That is where the line was drawn, his “death”, and the point of transformation  from his past life towards his future self.  The narrators rebirth occurs when he steps foot off the island, leaving the island as a completely different man.

The part that I love most about this archetype is that the outcome of the plot can be good or bad.  A character can come out of the transformation as good or evil.  There is no one set way that the Death / Rebirth archetype has to flow, except for remembering that there is a hard line in the transformation that the ending character / setting / etc.  has to be different from the beginning.

When you are working on your own material and if you think that you want to use the Death / Rebirth archetype, remember to play up the Symbolism.  Symbolism can be an intellectual piece utilized in portraying a Death / Rebirth plot.  Somes examples are: Morning and Spring usually represent birth or youth, while evening and Autumn can represent death or old age.  You can slip in Death / Rebirth nuances all through your story just by using symbolic references.  I have a habit of doing this with my stories all the time!

If you have enjoyed this topic, be sure to check out other posts in The Archetype Series.

2 thoughts on “Life after Death”