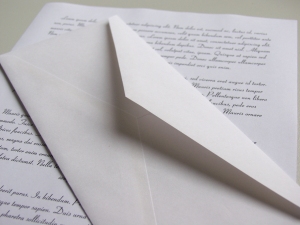 I’ve been promising myself (and my mother) for several years that I would start writing letters.  One would think my raging addiction to stationery and note cards would automatically have me using them, but, well, other than thank you notes, not so much.

I have kept a journal for decades and poured all my thoughts and feelings into it (an average of 70 pages a month). But I realized that, while my journals hold all the evidence of how much I care for friends and family, they aren’t going to share. That’s on me.

So this year is the year of letters. And though I’ve written about two dozen at this point, I’ve already learned a few interesting things:

Letter-writing really is becoming a lost art. I certainly can’t revive it on my own, but perhaps my efforts will cause a few ripples in the people I write to and keep it alive a little longer. I’ll let you know how the year of letters is progressing as the year goes on, but today I am hopeful that I have established a new habit and that I will be able to share my inner self with the people I care about in ways that journals don’t allow.

Have you felt the same urge? Have you wanted to write letters or do you already? We’re writers here, so I imagine more of us write them than the general population. If we don’t write them, who will?

What do you think will happen if personal correspondence moves entirely to electronic means? Will our great-grandchildren read about letters in history class?

What is your reaction when you receive a personal letter in the mail?

8 thoughts on “Reviving the (nearly) Lost Art of Writing Letters”